Many people think of cannabis as a recreational drug, but, in recent years, many scientists have looked into how it might benefit people’s health.

The active elements in cannabis, which are known as cannabinoids, are responsible for its possible health benefits.

Cannabis contains over 120 active ingredients, and they all have different properties. This poses a challenge for researchers interested in the health benefits of cannabis, as they need to understand how each substance will affect the body.

The cannabinoid that scientists know the most about is delta-9-tetrahydrocannabinol (THC). This is a psychoactive substance that affects the way that people think. Research suggests that harnessing its properties could lead to treatments for a range of health conditions.

Three medications containing synthetic THC, which has a similar structure to the natural ingredient in cannabis, already have approval from the United States Food and Drug Administration (FDA). Marinol and Syndros can help people with anorexia that results from certain causes. Cesamet can help relieve the vomiting and nausea that can occur with cancer chemotherapy.

In June 2018, the FDA also approved cannabidiol (CBD), another ingredient of cannabis, as a therapy for treating seizures that result from two types of epilepsy. CBD appears to hold promise as a treatment for a range of conditions.

This article discusses the scientific evidence on the health benefits of cannabis for psoriasis. It also looks at the possible risks of using cannabis to treat this condition.

Cannabinoids may have health benefits such as reducing inflammation, reducing itching, and slowing cell growth.

Psoriasis is an itchy and painful skin condition. A problem with the immune system causes too many skin cells to develop, which build up on the surface before they are mature. These skin cells form red patches with a covering of silvery scales.

Sometimes the skin patches can crack and bleed. People with psoriasis may also experience inflammation and swelling in other parts of their body.

According to the National Psoriasis Foundation, up to 30 percent of people with psoriasis develop psoriatic arthritis, which leads to stiff and inflamed joints.

There is currently no cure for psoriasis, but the right treatment can help people manage the symptoms.

Some treatments have side effects while others become less effective over time. As a result, scientists are always looking for new ways to manage this condition.

Potential benefits of cannabis for psoriasis

In the body, chemical messengers called endocannabinoids play a role in many functions, including:

When a person uses cannabis, the cannabinoids in the drug may affect some of these bodily functions.

Researchers believe that some cannabinoids may offer several possible health benefits. These include the following:

Inflammation is a symptom of both psoriasis and psoriatic arthritis.

A 2009 study found that some of the cannabinoids that occur in cannabis, including some forms of THC, could help regulate the immune system and reduce inflammation.

In 2016, research suggested that some cannabinoids might benefit people with psoriasis by affecting the interaction between the body’s immune and nervous systems.

In people with psoriasis, skin cells reproduce too quickly. Cannabinoids may slow the growth of skin cells and reduce their accumulation on the skin’s surface.

In 2007, a study found that the cannabinoids delta-9-tetrahydrocannabinol, cannabidiol, cannabinol, and cannabigerol appeared to slow the growth of cells called keratinocytes in the outer layer of the skin. The researchers proposed that these substances could play a role in treating psoriasis.

A 2016 review supported the idea that cannabinoids may be a useful treatment for psoriasis.

Cannabis may help to reduce pain. A 2015 article in JAMA noted that there is significant scientific evidence to indicate that cannabinoids can relieve pain.

This ability may mean that cannabis could help people with psoriasis and psoriatic arthritis to manage the pain and discomfort relating to this condition.

Conversely, in 2018, researchers in Australia found no link between cannabis use and a reduction in pain or lower use of opioids to control pain.

However, the participants were not taking specific cannabinoids for medical purposes. They all had prescriptions for opioids and were choosing to use cannabis alongside them to relieve pain, improve sleep, or relax.

Harnessing the power of cannabinoids as medication may produce benefits that are not apparent with recreational use. 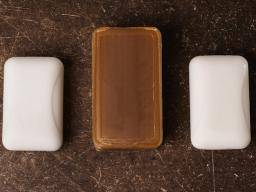 Soap for psoriasis: All you need to know
Using the right soap for psoriasis can prevent further irritation, help the patches heal more quickly, and possibly even treat psoriasis.
READ NOW

The cannabinoids in cannabis may relieve the itching that occurs with certain skin conditions, including psoriasis.

A 2017 review exploring the relevance of cannabis in dermatology noted that a cream containing palmitoylethanolamide (PEA), which affects cannabinoid type-1 receptors, appeared to reduce itching in people with prurigo, lichen simplex, and pruritus.

The authors suggested that cannabinoids could play a role in reducing itching.

One of the most painful symptoms of psoriasis is the cracking and subsequent bleeding of the affected skin patches.

A 2016 study in mice found that cannabinoid receptors play a role in wound repair. Scientists have also identified some anti-inflammatory actions of cannabinoids.

In the future, treatments involving cannabinoids could help heal the open sores that psoriasis causes.

Psoriasis is a long-term condition that currently has no known cure. Over time, it can have a negative impact on a person’s mental well-being.

Stress can be a trigger for psoriasis flare-ups. There are also links between psoriasis and depression, and between depression and inflammation more generally.

In 2017, researchers reported that a low dose of THC reduced stress in people undertaking a public speaking task. However, higher doses were likely to increase anxiety.

A healthcare professional should be consulted before using cannabis as a psoriasis treatment.

People should speak to a doctor before using cannabis for psoriasis.

It is critical to remember that cannabis is only legal in some states for both recreational and medical purposes. Approved medications containing cannabinoids may need a prescription.

Those who are interested in using cannabis for psoriasis should check the local laws in their area so that they can make an informed decision about whether or not to use it.

The best way to use cannabis to treat psoriasis is to apply it in the form of a tincture or oil to the affected skin.

Cannabis smoke releases skin-damaging chemicals into the air, which can aggravate skin conditions. It is also hard on the lungs and can slow down healing, so people with psoriasis should avoid the drug in this form.

Cannabis is also available as an inhaler or vaporizer. There is very little research on the safety of taking it in these forms, so it is best to use them with caution and only when a doctor advises.

Some of the ingredients in cannabis show promise as a treatment for psoriasis.

The positive effects of cannabinoids on the immune system and pain receptors mean that cannabis might provide relief from psoriasis symptoms. It is also possible that future medications may include some of the active ingredients in this drug.

As with any new treatment, people thinking of using cannabis to manage psoriasis should discuss their plans with their doctor. They should also refer to their local laws about cannabis and cannabinoid use.

It is important to remember that medicinal cannabis is a complementary treatment, which means that people should use it as part of a more comprehensive treatment plan.

Some of the ingredients in cannabis appear to help with some health conditions. Does this mean the recreational use of cannabis can be beneficial to health?

Marijuana has effective and proven medicinal uses. People can use different parts of the plant, which they may apply topically, take orally, or smoke. Smoking is the least desirable way to use the plant as it is irritating to the lungs and can trigger asthma or other conditions.

The intent of recreational use is often to achieve a “THC high.” Products that contain only CBD typically have little to no THC, so they do not cause a high. People using the entire cannabis plant will take in CBD and other potentially healing ingredients, and the effects may be calming. However, the effect of the whole plant is more challenging to study because of the varying quantities of CBD, THC, and other active factors.

Debra Rose Wilson, PhD, MSN, RN, IBCLC, AHN-BC, CHTAnswers represent the opinions of our medical experts. All content is strictly informational and should not be considered medical advice.

Is CBD The Answer To Combatting Psoriasis

Is Cannabis an Effective Treatment for Psoriasis

Want to know about our offers first?

Yes - Continue to Site No